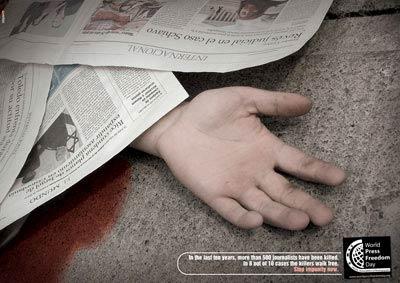 Mexico is one of the most dangerous countries in the world to be a journalist or writer.  Since 2006, over 46 Mexican journalists and writers have been killed or disappeared, and their lives continue to be threatened.  As a result, many journalists and media outlets have opted to sensor themselves and have stopped reporting on organized crime in the country.  Earlier this month I met with John Ralston Saul, Canadian author and President of PEN International, who was in Mexico to put pressure on the new Mexican government to fight against impunity in the country.  The following article ensued from our conversation.

MEXICO CITY – In March 2013, a small PEN delegation travelled to Mexico for the launch of the Mexican edition of The Dissident Blog, and to press the Mexican government for more action on impunity. The group met with key figures from the Justice department including the Attorney General, the Special Prosecutor for Crimes Against Freedom of Expression, and senior officials from the Ministry of the Interior (Gobernación). PEN came with two main messages: that Mexico needs further legal reforms to allow the Federal Justice Department to act, and President Enrique Peña Nieto should condemn acts of violence towards freedom of expression.

“This is a country where the president has enormous influence, as well as power,” said John Ralston Saul, the President of PEN International. “It’s astonishing that the head of state has not stood up regularly and said, in a major way, ‘This is wrong. Freedom of expression is central to democracy. I am the elected leader, and I am instructing my government to move with all urgency on this front.’” He noted that during the recent election campaign, freedom of speech and violence against journalists and were rarely mentioned by any candidate – an astonishing omission given the high number of deaths and kidnappings. The Attorney General promised to convey this message to the President.

(Note, the cover photo for this page is not mine)