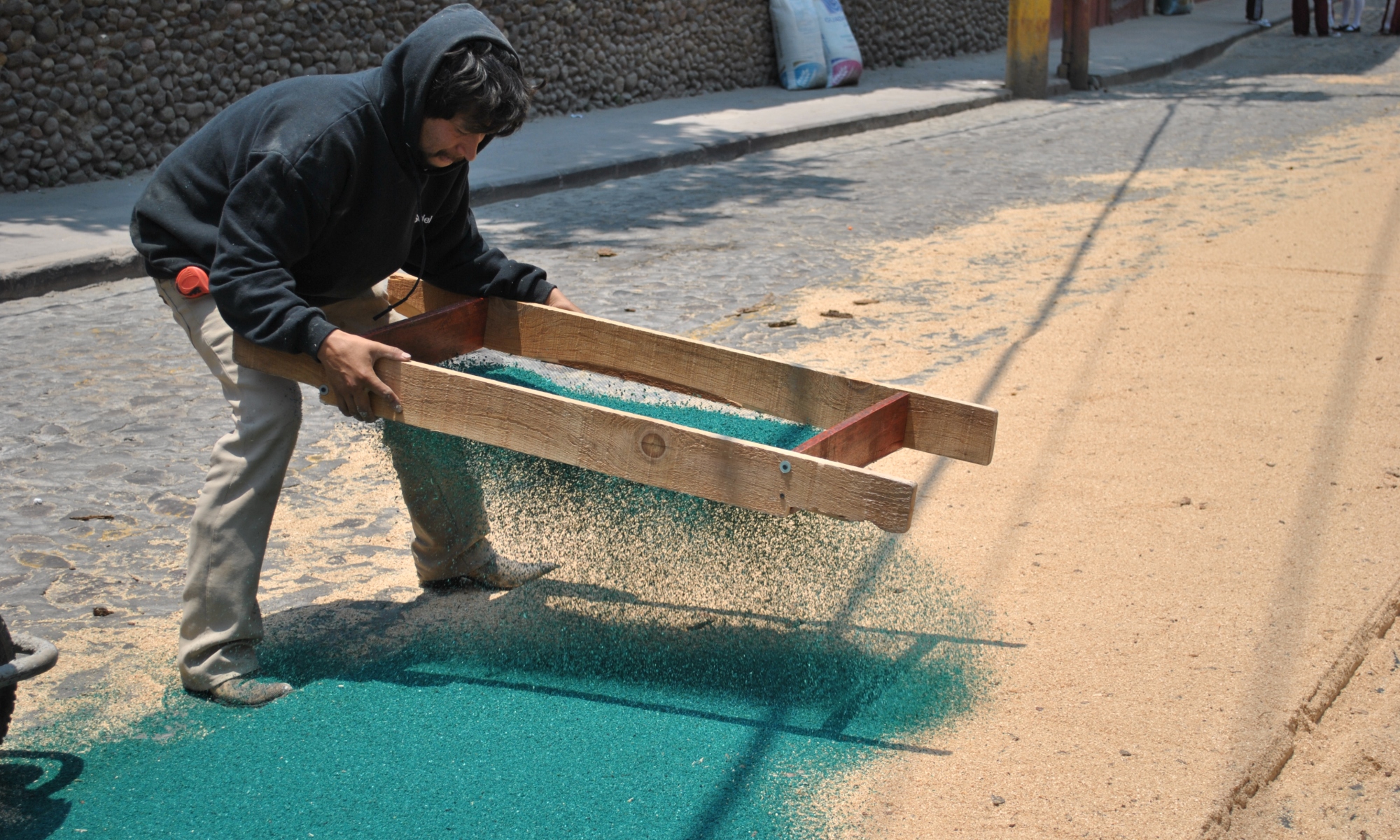 (Please hit the HD button when watching this video!)

The small town of Angangueo is a colourful little place surrounded by mountains in the central Mexican state of Michoacan.  On May 3rd they celebrate el Dia de Santa Cruz with enough fireworks to blow up a small planet.  El Dia de Santa Cruz (Day of the Holy Cross) is celebrated across the country and is known as a day to honour the construction worker.  In Angangueo, this means spending an entire day constructing a kind of carpet made out of sawdust and woodchips that runs through the town, and then in the evening watch as the priest leads a procession through town walking over and destroying the carpet – all to live mariachi music and one of the most amazing fire and light displays I’ve ever seen.  On this day they also honour the Virgin Dolores (Virgin of Sorrows) and Santo Entierro (Saint of Holy Burial) and carry large replicas of them throughout the procession, always keeping death, sorrow and reflection nearby.

A Bit of History …

The town of Angangueo has an interesting history and seems to be a bit of a living paradox.  It was founded in 1792 after a large mineral deposit was discovered in the area, and for the next three centuries it was almost exclusively a mining town.  Because the townspeople were all employed in the mines, they didn’t maintain or develop any of the area’s traditions such as cuisine, artisan crafts etc. or develop other skills.  As a result, over the years they’ve become more and more dependent on the mine for their livelihood.  But according to local museologist Gabriela Acevedo Castillo, the residents also highly identify with the mine; it’s become an important tradition and a part of their culture.  In 1991 the mine closed because it was deemed no longer economically feasible.  This left most of the town unemployed but also left them feeling like a part of their culture had been ripped away from them.

Now, after 22 years, the mine is preparing to reopen and many are excited for the opportunity to work again.  For many people, this means they can stay close to their families and won’t be forced to look elsewhere for work, like the U.S. for example.

From anywhere in the town you can see the famous statue of the miner – a man wearing a hard had, holding a heavy-duty drill.  It sits on a plateau halfway up the mountain as a symbol of respect and admiration towards the miner.  But just below it, in the centre of town, is a mural that depicts the mines more brutal history:  portraits of those who have died in the mine, another homage to the famous mining catastrophe in 1953 that killed dozens of people, and a scene depicting western businessmen in suits running away with money as local Mexicans toil away underground.  Both of these public monuments serve as constant reminders as to how the mine has been both a burden and a savior.

But despite all of this, or maybe because of it, on May 3rd they celebrate.