Benjami Alvaro picking a flower called Chiriwayusa in Quichua, or Wayusa, which he will use for a medicinal steam bath. (Photo: Kimberley Brown) 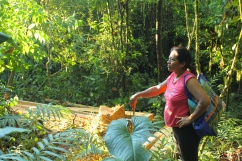 Dalia Tapuy stares out into the rainforest in their backyard, where someone has just cut down some trees for local construction work. (Photo: KB)

A view of the rainforest from Tama Yuria, in the province of Napo, Ecuador. (Photo: KB)

The Yawarpanga plant, as it’s known in Quichua, is identified by the red tips on its large, green leaves. It’s used by women to regulate their menstruation. (Photo: KB)

A tree called Cuyapilche in Quichua, or Calabasa in Spanish. According to traditional medicine, the pit from the fruit of this tree can cure Dengue. (Photo: KB) 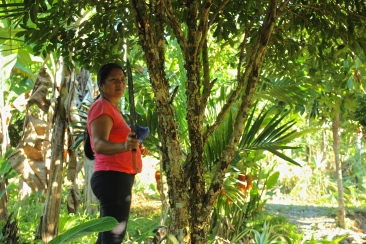 Dalia Tapuy, Alvaro’s wife, trimming a branch from a tree in their front yard in the Amazon rainforest. (Photo: KB)

The little red flowers of the Shungo sisa as its known in Quichua, or “tear of heart,” is used to improve blood circulation and treat heart conditions. (Photo: KB)

TAMIA YURA, ECUADOR – Benjamin Mamallacta Alvarado and his wife Dalia Tapuy were both recently sick, but instead of going to a pharmacy to pick up medication, they went into their backyard, which just happens to be in the Amazon rainforest. Born and raised in the Amazon, Alvarado has been using medicinal plants all his life from what is sometimes called “nature’s pharmacy.”

“You take out the essence of the leaf and mix it with lemon then put it directly into the nose, because here it will sting and attack the cold (virus),” Alvarado said while preparing an elixir for his wife. Three different local plants are in this particular mixture: ginger from the Amazon (Costaceae) (a green leafy plant, different from the ginger found in supermarkets), Guayusa (Ilex guayusa) (a common plant used in teas as an energizer, or caffeine alternative), and Kalanchoe (Crassulaceae) or Chubriyuyu (as it’s known in the local indigenous Quichua language, and used for the common cold).

“You put it in the nose, you don’t drink it,” said Alvarado. “Last week my wife had a strong cold, so we prepared this and she got better quickly.” He adds that you can also take the mixture twice a month to keep the body strong.

Alvarado learned the healing powers of plants through his father, Casimiro Mamallacta el Kasike. He was a trained Yachaj, as it’s called in Quichua: a shaman or traditional healer. This knowledge has long been passed down through oral teachings from Yachajs who have spent years living with the forest, meditating and listening to nature.

But fending off the common cold is only one use of medicinal plants found in the Amazon.

In Alvarado’s community of Tamia Yura, just a 10-minute drive from Ecuador’s Amazonian city of Tena, there are plants that can cure fever, bronchitis, diarrhea, stomach infections, colic, urinary tract infections, dengue, hair loss and even the initial stages of cancer, among other things, according to indigenous belief. Alvarado and his wife are both indigenous Quichua, but similar plant usage can also be found among the Shuar, Achuar, Woarani, Sapara and other indigenous communities that live in the Amazon.

On a casual walk around his home, Alvarado points out several plants in their Quichua names that carry medicinal powers. The leaf from the Kiwiyuyu (Acanthaceae), or the “leaf of sprains,” can cure sprains if ground into a paste and rubbed onto the injured body part. The Yawarpanga (Aristolochiaceae) is identified by the red tips on its large, green leaves and is used by women to regulate their menstruation. The little red flowers of the Shungo sisa (Bignoniaceae), or “tear of heart,” is used to improve blood circulation and treat heart conditions.

Very few of these remedies have been chemically studied, so many people are cynical about the real powers of medicinal plants, according to Cristina Penuela, biologist at the Regional Amazonian University (IKIAM) in Tena.

Penuela herself admits to being a bit skeptical about the plants’ proclaimed abilities, but also says that indigenous knowledge shouldn’t be taken for granted since it’s based on countless years of living in the rainforest.

“In general, people of the Amazon know plants,” she said. “It has been many millions of years that their local ancestors have been studying (plants)… and after trial and error, these societies were able to discern if a plant was antifungal, or serves some kind of purpose. There should be some respect for this accumulated knowledge.”

The wisdom of the Yachaj

The training to become a Yachaj, and developing your internal, mental and spiritual awareness is long and arduous. It can take anywhere from three to 10 years (depending on your community) of avoiding physical contact with your spouse, living on a strict diet (including no garlic or onions, whose smell is said to keep the spirits away), and living predominantly in the forest.