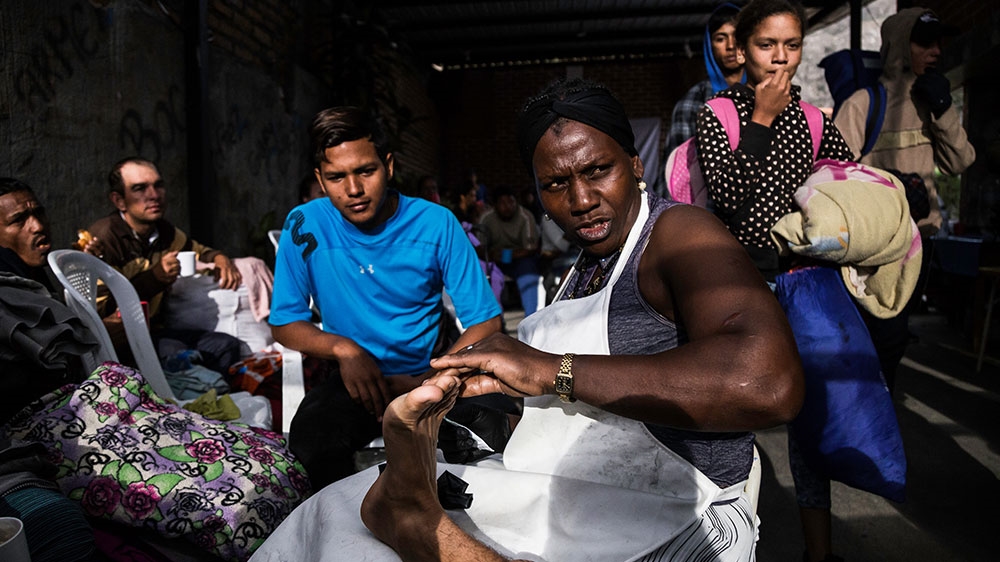 JUNCAL, ECUADOR – The sun had already set when a group of 10 Venezuelans trickled into Carmen Carcelen’s home in northern Ecuador late last month. They joined about 100 others who were already there. Two volunteers immediately invited the new houseguests to put down their tattered suitcases and backpacks, and offered each person a bowl of soup.

As they started eating, Carcelen was already in the middle of her nightly speech, explaining the house rules: Keep a peaceful atmosphere, wash your plate after you eat, do not consume drugs or alcohol in the house, and hand over any knives or other weapons you might be carrying. Those who refuse to comply will be escorted out of town, she said.

“Here the price of food, the bed you’re using, the water and electricity is all free: All you have to do is behave well,” Carcelen told her guests.

The 48-year-old mother-of-eight has been welcoming Venezuelans to her home for the past two years, providing a moment of relief to migrants and refugees on their long, and increasingly-dangerous journey. Since August 2017, she estimated that she has given shelter to over 8,500 Venezuelans travelling south. She is also known for giving people hugs when they need it and rubbing their aching feet.

The number of people passing through Carcelen’s house spiked after the Ecuadorian government announced the implementation of strict new visa requirements. Thousands rushed to the border, trying to enter the country before August 26, the day the new laws came into effect. More than 4,500 Venezuelans arrived daily at Ecuador’s northern border in the days leading up to the change, up from the previous norm of some 2,500 a day. Most were fleeing extreme poverty, hyperinflation and food and medicine shortages back home.

At this same time, up to 300 people a day were arriving at Carcelen’s doorstep, triple the amount from six months ago when the daily average was 100 people. While she gave everyone meals, she was only able to give beds to about 150 people a night, prioritising families with children, she said.

“Where are they expected to go?” said Carcelen, criticising the new visa restrictions, “they don’t have wings, they can’t just hover around in the sky.”

‘I thought I would be sleeping in the streets tonight’

Carcelen did not intend to convert her home into a hostel. The devout Christian said she has always had people in her house and loves to help travellers. In 2017, Carcelen and her husband saw a group of Venezuelans walking on the side of the highway when one man collapsed out of exhaustion. They picked up the group and offered them a place to rest for the night. Things grew organically after that, as more and more migrants and refugees began coming through.

Her home in the small town of Juncal is only 80 kilometres (about 50 miles) from Rumichaca, the main Colombia-Ecuador border crossing. The majority of the 1.7 million Venezuelans who have entered Ecuador since 2015 have come through this entrance. Those who enter on foot, eventually walk past Juncal as it sits on the PanAmerican highway, on the way to the capital, Quito.

Today, those who end up at Carcelen’s home have either been referred there by other migrants or taken there directly by Carcelen’s neighbours who see them walking on the highway.